Cheapest treatment the most effective against ‘sun damage’

A cream that people can apply at home themselves has proven to be the most effective therapy against the common skin condition of actinic keratosis, also known as ‘sun damage’. Dermatologists from Maastricht UMC+ compared the four standard forms of treatment, which until now had been considered of equal value. The cheapest has now proven to be the most effective, as well as the most highly rated by patients. The leading New England Journal of Medicine published the results of the study today


A self-applicable cream has proven to be the most effective therapy against the common skin condition actinic keratosis, also known as ‘sun damage’. Dermatologists from Maastricht UMC+ compared the four standard treatment modalities, which until now had been considered of equal value. The cheapest therapy has now proven to be the most effective one and was rated best by patients. The leading New England Journal of Medicine published the results of the study today. 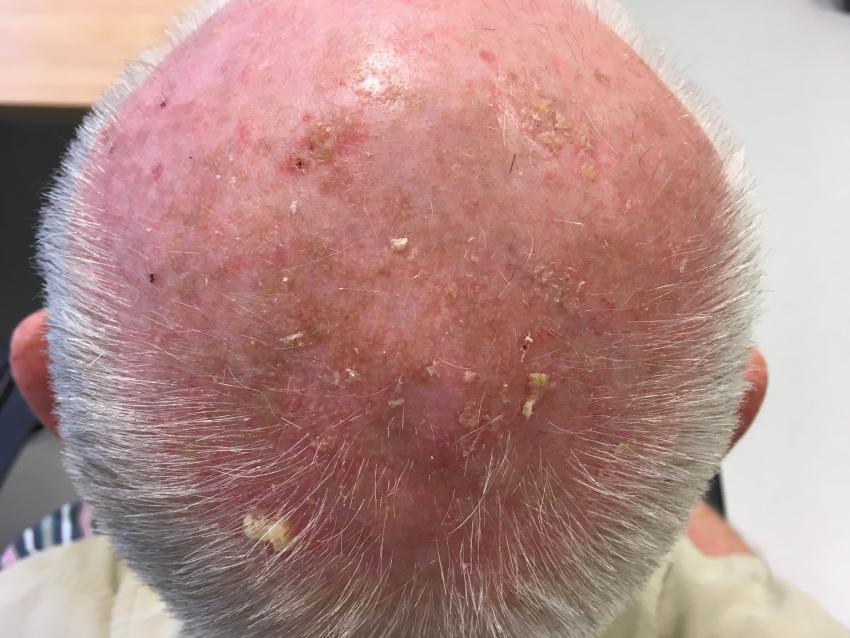 Actinic keratosis is characterised by a red and rough skin caused by UV-radiation of the sun. An estimated one and a half million people in the Netherlands suffer from this condition. At least half of all men and a third of all women over the age of fifty are affected by it. Without treatment, actinic keratosis can develop into skin cancer.

Four therapies
Four different treatment modalities for actinic keratosis are prescribed in practice: photodynamic therapy (a kind of light therapy) that is carried out in a hospital, two creams (imiquimod and 5-fluorouracil) that need to be applied for four weeks, and a more recently introduced gel (ingenol metubate) with a treatment duration of 3 days. In current guidelines none of those treatments is preferred over the others. Which of the four options is selected depends on the personal preference of the doctor and patient. Reason enough for the Maastricht dermatologists to compare the effectiveness of those therapies. Over 600 patients in four different hospitals* participated in this study. Patients were randomly assigned to one of the four  treatments.

Cream from 1950
The results of the study showed that treatment with 5-fluorouracil cream had a success rate of approximately 75 percent. The other therapies scored significantly lower (imiquimod cream: 54 percent; photodynamic therapy: 38 percent, and ingenol metubate gel: 30 percent). Researchers regard a treatment as successful if three-quarters of the patches have disappeared following therapy. Notably, 5-fluorouracil cream is a treatment that was introduced to the market as far back as 1950. It can be applied at home and is also the cheapest treatment.

International guidelines
With their study,  the Maastricht dermatologists hope to make a valuable contribution to establishing (inter)national treatment guidelines for actinic keratosis. “As it happens, the results of the study clearly show that there is in fact a preferred treatment”, says researcher and dermatologist (pp) Maud Jansen. “In addition, use of 5-fluorouracilcream as the standard therapy for actinic keratosis could also save millions of Euros in healthcare per annum. only in the Netherlands.”