A scan instead of sentinel lymph node surgery

In 2019, making a scan of the armpit glands to determine whether breast cancer has spread, seems more logical than surgery to remove the glands (the sentinel lymph node operation). For many women, the latter leads to long-term complaints, such as a stiff shoulder and accumulation of fluid in the arm (lymphedema). Until now, it wasn't technically possible to make such a scan reliably. In a few years, researchers at Maastricht hope to change this through a study using the only PET-MRI scanner in the Netherlands.

In 2019, making a scan of the armpit glands to determine whether breast cancer has spread, seems more logical than surgery to remove the glands (the sentinel lymph node operation). For many women, the latter leads to long-term complaints, such as a stiff shoulder and accumulation of fluid in the arm (lymphedema). Until now, it wasn't technically possible to make such a scan reliably. In a few years, researchers at Maastricht hope to change this through a study using the only PET-MRI scanner in the Netherlands.

Unfortunately, ultrasound is not 100% reliable
When breast cancer is diagnosed, the next question is: are there metastases? At present, the common imaging technique to investigate this is a traditional ultrasound scan, which is not 100% accurate. Even if the ultrasound doesn't show anything, metastases are found in 20–25% of sentinel lymph node operations. Surgeon and researcher Dr Marjolein Smidt: "In the past, all the armpit glands on the side of the affected breast were removed: the axillary dissection. The sentinel lymph node operation is comparatively already a major advance. We remove one or two glands that can reliably predict whether there are metastases."

Hopefully, the PET-MRI scan will succeed
After this standard operation, the glands are clean in about eight out of ten cases. Despite the apparent success of this "minor procedure", many women suffer long-term complaints. "This is even more annoying when there are no metastases", says Smidt. "Imagine having to undergo abdominal surgery for suspected gallstones; this is unnecessary, thanks to imaging techniques. In the future, we hope to make a reliable picture of the sentinel gland with the PET-MRI scanner and possibly eliminate the need to operate."

A unique scanner for the Netherlands in Maastricht
Trainee radiologist and researcher Dr Thiemo van Nijnatten is part of the large team needed to conduct this research. "This is the only scanner of its kind scanner in the Netherlands, and it offers unique possibilities for visualising soft tissue, such as the glands in the armpit." Within the next three years, he hopes to find the 125 patients needed to determine whether such a scan can reliably replace the operation.

A hospital in Edinburgh also participates in the study
PhD student Kees de Mooij is studying full-time. To assemble the necessary patient group more quickly, he sought collaboration with a hospital in Edinburgh that also has a PET-MRI. De Mooij: "You also have to find a group of doctors and nurses conducting similar research. We have achieved this and hope within six months they can also ask patients to participate in the study." Van Nijnatten: "Once you can demonstrate the technique's reliability through two research centres, its implementation in the care process is also easier. The evidence is all the more convincing."

Minor intervention, major inconvenience: change could be possible
All three researchers emphasise the importance of having a large group of caregivers and researchers to support a project like this. And, of course, such a study needs funding. In this case, it comes from the Cancer Research Fund Limburg (Kankeronderzoekfonds Limburg), part of the Health Foundation Limburg, which raises funds for scientific research in Maastricht. Smidt: "Getting another research grant is probably quite difficult for this subject because many people underestimate the burden of sentinel node surgery on patients. They may question whether such a minor intervention is all that bad. As a surgeon, however, once you've seen lymphedema appearing after the operation, you want to understand what's going wrong and how to prevent it."
- text continues below the photo - 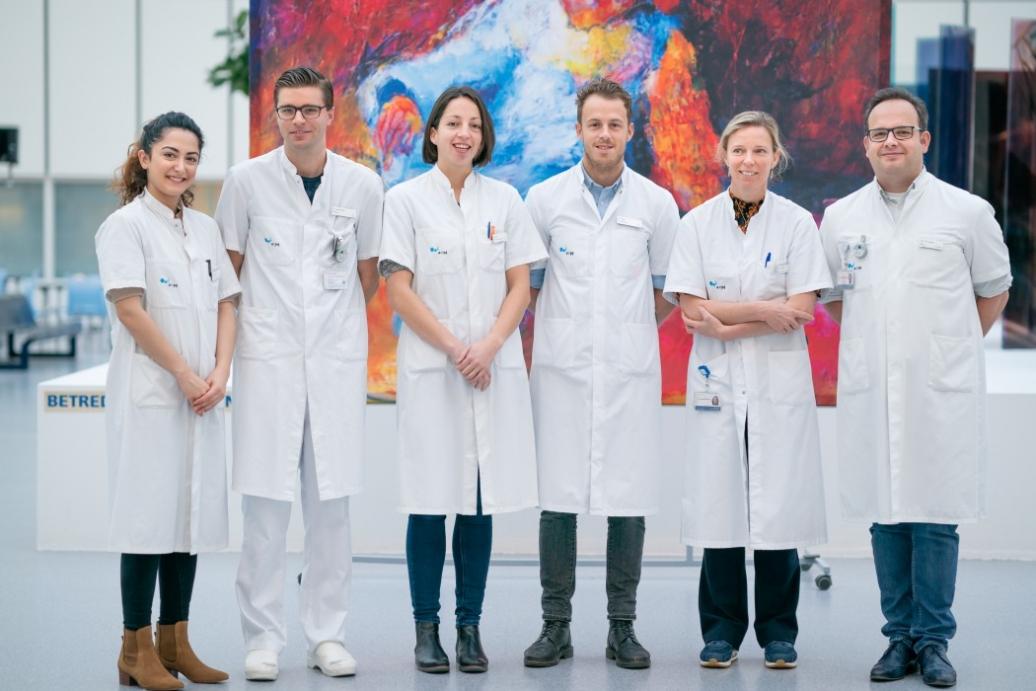 A good scan was possible with a small patient group
The same "underestimation" of the problem is perhaps one of the reasons why, worldwide, this research is only being done in Maastricht. And the fact that PET-MRI technology – i.e. the combination of the two long-established scanners – is relatively new. In a small group of about ten patients, the researchers first demonstrated it is technically possible to make a good scan of the sentinel gland. To check whether the scan was equally reliable, they waited before comparing the images with the pathologist's results after the operation. Smidt: "Sometimes, you have to control your curiosity as a researcher because you need more than ten scans to make scientifically reliable statements. You also risk discarding a possibly promising technique." Therefore, the first study was small and focused on fine-tuning the scanning technique: what is the best position for the patient in the scanner, where on the armpit do you place the receiving coil?

Studying the cost of PET-MRI versus sentinel node surgery
As well as checking whether the scan adequately visualises metastases, the study also examines the predictive value of how well chemotherapy works for particular patients. A scan is therefore made before, during and after the treatment. Since PET-MRI scans are expensive, the team is also conducting a study into the cost-effectiveness of sentinel node surgery. However, the process with a lymphedema – with its compression stockings, physical therapy, sick leave and so on – is expected to be more expensive, not to mention the detrimental effect on the patient's quality of life.