"We must break the taboo around endometriosis"

Question: what do Whoopi Goldberg, Hillary Clinton and the Dutch 3FM-dj Angelique Houtveen have in common with approximately 200 million women worldwide? Answer: they all suffer from the relatively unknown disease endometriosis. Doctor and researcher Esther van Barneveld is committed to increase awareness and to improve the treatment of the disorder. In this article she will explain how she does this and why this is important.

Question: what do Whoopi Goldberg, Hillary Clinton and the Dutch 3FM-dj Angelique Houtveen have in common with approximately 200 million women worldwide? Answer: they all suffer from the relatively unknown disease endometriosis. Doctor and researcher Esther van Barneveld is committed to increase awareness and to improve the treatment of the disorder. In this article she will explain how she does this and why this is important.

Let us start at the beginning: what is endometriosis exactly? 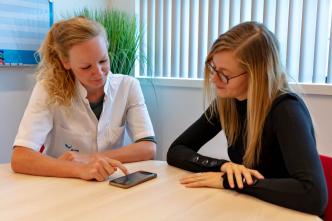 Esther: "No fewer than 1 in 10 women worldwide suffer from endometriosis; these are 400.000 women in the Netherlands. The consequences are intense abdominal pain, reduced fertility and pain during sexual intercourse. With endometrioses, the hormone sensitive tissue that normally lines the inside of the uterus, grows outside of the uterus and causes the extreme pain. Even though this disorder is as common as diabetes and rheumatism, many have never heard of it or know little about it. However, endometriosis massively affects life! This disease can challenge relationships, work and sports. The quality of life for people with endometriosis usually shows a significant decrease."

If endometriosis is such a common disease, why do we hear so little about it?
"The symptoms are more severe during menstruation. As a result, most women –and also doctors and experts – believe it is just a 'bad period'. Therefore, patients are afraid to mention their symptoms and are on average only diagnosed after eight years. And even if there is a treatment, like painkillers, medication and/or a surgery, the pain usually does not disappear. Why that is the case, is still unclear. In conclusion, we need research, as well as increased awareness for endometriosis. We must break the taboo around endometriosis."

How do you want to help people with endometriosis?
"I support the national Endometriosis Foundation in making this condition better known. I am also working with a team on a new research method—an app for patients. What makes this method innovative is the fact that the app measures the pain symptoms in real-time and takes into account factors from daily life that can affect pain, such as sleep, stress and nutrition. All the knowledge we gain from the app can be applied in the treatment, which leads to faster, more personalised, and better care. We can also use the app to more reliably test whether a new treatment is effective or whether yoga therapy can help, for example."

What do you need to develop the app?
"Developing an app costs a lot of money; we need €7.500. This is why my team and I are taking every action we can in order to raise the funds. For example, we will cycle 500 kilometres between Christmas Eve and New Year! Next to that, we are excited to be part of the campaign 'For Each Other' by the University Fund Limburg/SWOL. Click here for more information and to support our endometriosis project."

Where does your interest for endometriosis come from?
"As a doctor and researcher at the Gynecology ward at the Maastricht UMC+, I frequently meet people who suffer from endometriosis. During my internships my mentor learned me a lot about the disorder. I was surprised that the disorder is relatively unknown, even though the consequences are very big. I want to contribute to the quality of life of patients with my research!"

Contribute to Esther's project
Esther van Barneveld (l. in picture) was born in Wageningen and studied gynaecology at Radboud University in Nijmegen. She used to work at the gynaecology ward in the hospital of Arnhem, but moved to Maastricht because she got the opportunity to carry out PhD research there. Besides her work, Esther spends time on her hobbies and sports: swimming, cycling and running. The Rotterdam marathon and a full triathlon in Copenhagen are planned for 2020. After her PhD research, she hopes to become a gynaecologist. Would you like to make a donation to the ‘For Each Other’ campaign? Donate via www.umcrowd.nl.